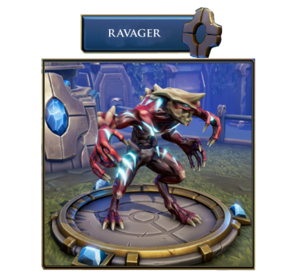 Ravager is one of the Masters in Minion Masters. This master is unlocked with 1000 Shards or 525 Rubies.

Ravager was the apex predator of his world, but with no regard for anything but the hunt, he eradicated every other living thing. He now travels the universe looking for any kind of fight.

Ravager is a fierce Master, able to quickly tear through close combat minions, but if they have a gun, he has a problem and that's where he needs Brutus!