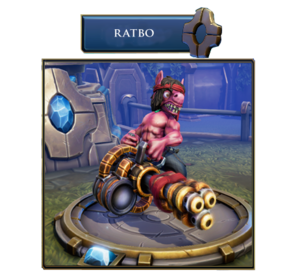 Ratbo is one of the Masters in Minion Masters. This master is unlocked with 500 Shards or 300 Rubies.

Many tales are told of Ratbo and most Scrats agree they can't all possibly be true.

Most of them revolve around his beloved Machine gun although Ratbo has been known to also throw bullets with such force they can kill.

Ratbo is among the most famous Scrat leaders. Scrats will gladly follow him blindly and in great numbers - they have a Minigun insurance...