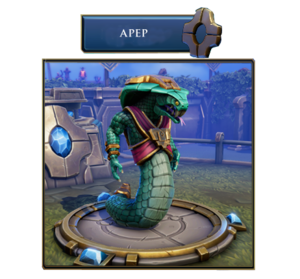 Apep is one of the Masters in Minion Masters. This master is unlocked with 500 Shards or 300 Rubies.

Apep the Serpent God has the ability to gain free cards and make himself invulnerable with a totem honoring himself!

Gift of the Serpent God (Unlocks at 20 XP)

Greater Gift of the Serpent God (Unlocks at 120 XP)